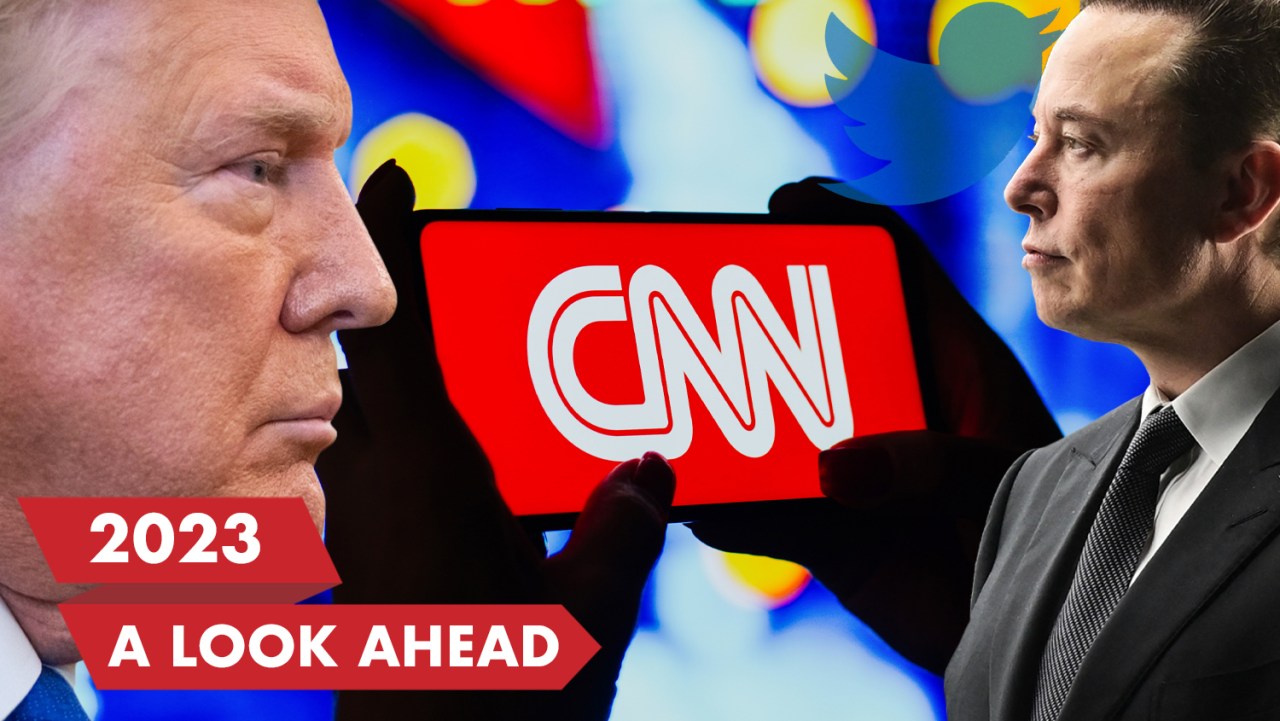 Ten News Media Stories To Watch In 2023, From Trump And Twitter To TV Ratings

It’s hard to view the past year in the news business as anything other than testy and tumultuous.

What started as a rather promising job market instead ended with an ad slowdown dominated by news of layoffs and hiring freezes.

News networks and news divisions enter the coming year with the ramping up of a presidential cycle, but even with Donald Trump already on the ballot, there are doubts that audience numbers will match the blockbuster figures from late in the past decade.

It’s possible to outline, in broad strokes, what to watch for in 2023, but it’s a bit of a fool’s errand to predict. Over the past year, Ukraine’s resistance and resilience against Russia defied expectations. In politics, Democrats held their own in the midterms against historic trends. In government, the January 6th Committee surprised by delivering a series of TV-ready hearings, laying out a simple-to-understand narrative that included bombshells and surprise witnesses. In the celebrity sphere, the Johnny Depp-Amber Heard defamation trial captivated attention, in part because a judge’s decision to allow cameras in the courtroom made it a daily soap opera.

So here is what to watch in the next 12 months:

Donald Trump’s campaign has already launched, even if it may not feel like it. After the first of the year, the focus of political media will shift to 2024, from what other GOP contenders enter the field to whether President Joe Biden decides to run for re-election. Early as it sounds, it is not unusual. The first Democratic debate of the 2020 cycle was on June 26, 2019. Well before that, in the 2008 cycle, Barack Obama and Hillary Clinton’s presidential campaigns were up and running by February 2007. News networks will look to the next presidential contest as a way to boost audiences and brands, given the blockbuster numbers of recent cycles, and will jockey to host town halls and debates. One of the storylines of the GOP primary race has already emerged: The potential fireworks between Trump and Florida Gov. Ron DeSantis, should the latter decide to run. Far more difficult to game out is what happens if Biden decides not to run, opening up the field to what is likely to be a long list of contenders.

No other news network had a more tumultuous 2022 than CNN. Total-day viewership was down 27% from a year earlier, but ratings only tell part of the story: The exit of Jeff Zucker, the short-lived CNN+, end-of-the-year newsroom layoffs, etc. The next year will be a test for chairman and CEO Chris Licht’s strategy, focusing on “core news gathering and products,” as he has trimmed the number of the network’s contributors, scaled back original series and films, and handed over original programming at HLN to Discovery. Meanwhile, he has said that he’s boosting investment in digital, where CNN.com remains a leader, while a revamped moving show, CNN This Morning, debuted in November. Licht’s most closely watched move may be what he does to primetime, where the 9 p.m. ET hour has lacked a permanent host since Chris Cuomo was fired in 2020, and primetime viewership was down 33% from a year earlier.

In contrast to CNN, Fox News has leaned in heavily on opinion, The Five and other panel shows, and Tucker Carlson and other talk-radio like hosts, often tapping into right-ward grievances in a way that, audience-wise, has worked: The network’s total-day audience was up 11% in 2022 vs. 2021, while CNN and MSNBC were down. Yet all of the networks saw ratings erosion in the primetime hours as the audience splinters and, when it comes to cable news in particular, ages. Licht, in a podcast interview with Kara Swisher, talked of the perils of fighting for a “bigger slice of a shrinking pie.” Instead, he saw the challenge as competing against non-news options. “I’m fighting for people in down news times. I’m fighting for people’s discretionary attention. And I don’t believe that the way to the future is to try to steal people from Fox.” The ramping-up of a presidential election cycle could indicate whether news outlets are able to draw back that viewer interest in an enduring way.

The year likely will start off with the high drama of just who Republicans will pick as the next speaker as they take control of the House. Whether it is Kevin McCarthy or someone else, Republicans plan to launch a wave of investigations of Biden’s administration, on topics ranging from Hunter Biden or the border. There even has been talk of a counter investigation of the January 6th Committee. Expect plenty of criticism for the networks if they don’t give those hearings the same level of attention that they paid to the January 6th Committee sessions, despite the false equivalency. More likely is that the focus will be on the tenuous GOP majority and the challenge of holding that together, as well as a potentially devastating standoff over the debt limit, expected in the third quarter.

Elon Musk has cooled it a bit since a whirlwind few days in December where he suspended a series of journalists then appeared to poll himself out of Twitter’s CEO job. Despite the erratic leadership of the platform, Twitter remains atop journalists’ go-to megaphones and news sources. But its future, to put it politely, is murky, and Musk himself has explained the need for mass layoffs by comparing the company to a crashing airplane. More chaos could be ahead if Musk follows through with plans to get rid of legacy blue checkmarks in favor of a subscription offering. His ownership has highlighted a long-simmering, publisher vs. public square issue for tech platforms, largely shielded from liability for content moderation decisions.

The former president continued to dominate news cycles in 2022, but not in the way that he previously enjoyed. Major broadcast and cable networks showed hesitation in how they will approach his 2024 candidacy, given the way they covered his kickoff announcement in November. But his candidacy may very well be overshadowed in the coming year by the spate of investigations he is facing, including that of Special Counsel Jack Smith’s federal probe of Trump’s handling of classified information and of the events of January 6th.

The billion-dollar-plus defamation lawsuits that election systems companies Dominion Voting Systems and Smartmatic filed against Fox News and other media defendants are moving forward. Both lawsuits focus on the role of media outlets in amplifying false claims about the 2020 presidential election, as the companies argue that Fox News was well aware that Trump and his allies’ allegations were bogus, while the network has defended itself on the grounds that the First Amendment protects coverage of issues in the public interest. The cases are in the discovery phase, with figures such as Lachlan Murdoch, Laura Ingraham, Tucker Carlson, Sean Hannity and CEO Suzanne Scott reportedly deposed. Dominion’s trial is scheduled to begin in April in a Delaware court, and if that proceeds as planned (always a big if in court cases), it will be one of the most closely watched defamation trials in recent memory, the exception being the Depp-Heard case.

Broadcast and cable networks excelled in their coverage of the war in Ukraine, at times at great personal risk and cost. An attack in March seriously injured Fox News’ Benjamin Hall and killed Fox News cameraman Pierre Zakrzewski and Ukrainian journalist Oleksandra “Sasha” Kuvshinova. According to the International Federation of Journalists, 12 journalists and media staff have been killed in Ukraine as of early December, the highest of any country. As the war drags on, the Biden administration and Capitol Hill lawmakers are concerned of the public losing interest, and a factor in that is the extent to which networks continue to devote resources to the conflict. Meanwhile, there are increasing concerns over press freedoms in Ukraine, as President Volodymyr Zelenskyy signed a law that expands government regulatory oversight.

Standard General’s proposed $8.6 billion acquisition of Tegna, which has 64 stations in 51 markets, is not one of the larger media mergers of recent years, but it has drawn significant vocal opposition, with the FCC expected to complete a review early next year. Although the commission, split 2-2 between the parties, has not yet weighed in, the protracted review is indicative of shifting regulatory environment for MA in the Biden administration. The Justice Department’s victory in its case against the merger of Penguin Random House and Simon Schuster, ultimately killing that deal, and the more recent FTC effort to block the Microsoft-Activision Blizzard combination are defining the general limits of what is possible for media CEOs’ consolidation dreams amid tumultuous times across the business. Regulatory agencies will continue their focus on big tech, but the past year also has reflected lobbying strength. For all of the rhetoric on Capitol Hill and elsewhere of the need to rein in Facebook, Amazon, et al, the most recent Congress failed to pass a series of robust new antitrust guidelines, underscoring lawmakers’ lukewarm desire to follow though on long-gestating complaints. What did pass was a law to increase merger fees as a way to boost enforcement.

The year 2022 was a dismal one for local media, what with more rounds of layoffs at print giants like Gannett and, amid a softening ad market, likely more to come across the industry. Steven Waldman, the chair of the Rebuild Local News Coalition, has said that on average, two newspapers shut down every week. Congress has highlighted the struggles of local media and what it means for democracy, but did not pass a series of proposals designed to boost newspapers and local stations. That included a payroll tax credit for hiring reporters, and an exemption from antitrust laws so outlets could collectively negotiate with tech giants for their content. The latter bill ran aground in early December, when Facebook threatened to remove news from its platform altogether if the law passed.