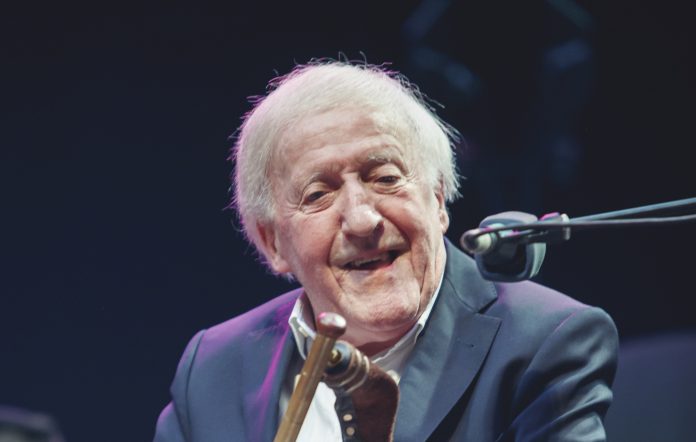 Paddy Moloney, leader of The Chieftains and one of the primary exporters of Irish music over the last 60 years, has died.

The musician’s death at the age of 83 was announced by The Irish Traditional Music Archive yesterday (October 12). No cause of death has yet been given.

Leading the tributes to Moloney was Irish flute legend James Galway, nicknamed ‘The Man with the Golden Flute’.

“It is with great sadness to hear of the passing of my very good friend and colleague, Paddy Maloney,” he wrote on Twitter. “A man with a vision and passion on bringing traditional Irish music to the masses for which we are forever indebted to. Such wonderful memories for which I shall always cherish.”

“The Irish music community, and indeed the much larger community throughout the world who found such inspiration in his work, will have learned with great sadness today of the passing of Paddy Moloney,” Higgins wrote.

“Paddy, with his extraordinary skills as an instrumentalist, notably the uilleann pipes and bodhrán, was at the forefront of the renaissance of interest in Irish music, bringing a greater appreciation of Irish music and culture internationally.

“On behalf of Sabina and myself, and on behalf of the people of Ireland, I would like to express my deepest condolences to Paddy’s family and friends, and in particular his wife, Rita, and his children, Aonghus, Pádraig and Aedín.”

Others to pay tribute include Irish singer-songwriter Imelda May, who tweeted: “So sad to hear of the passing of our dearest Paddy Moloney. He was ours wasn’t he. He made us all so proud of our heritage and brought such joyous energy. I’m honoured to have known and worked with not just a legend but a thoroughly lovely man.”

Moloney founded The Chieftains in 1962. Across their decades-long career, the band performed at a 9/11 memorial service at Ground Zero in New York City, on the Great Wall Of China and as part of Roger Waters‘ ‘The Wall’ performance in Berlin in 1990.