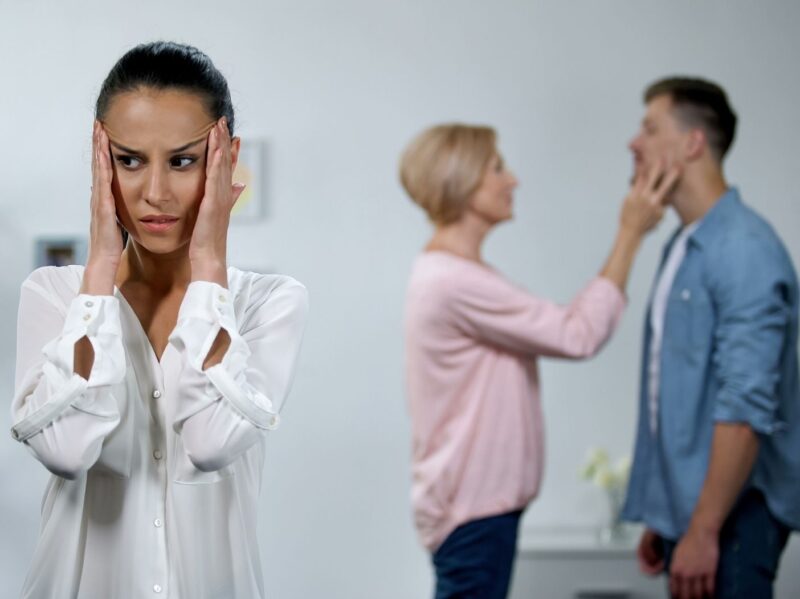 This Woman’s Husband Secretly Invited Mommy Dearest On Their Vacation

Wife asks Reddit “AITA” after husband refuses to respect her boundaries about MIL.

Taking a vacation with a spouse can be a time to reconnect and get away from the everyday hustle. You can have new experiences, learn exciting things about one another, and enjoy just relaxing and just being together.

However, when one person wants to add another person to the trip, things can get awkward quickly. And when that same person disregards every boundary the other has set, the situation can get ugly, fast.

That’s precisely what prompted one Redditor to ask, “AITA for walking out of the airport when I saw my husband’s mom standing there with her luggage?”

The original poster, whom we’ll call Sophia, and her mother-in-law don’t get along.

Sophia says that her MIL, whom we’ll call Carol, always behaved strangely towards her. It began with making strange comparisons between them and escalated to full-on imitation, like Carol dying her hair purple after Sophia did. To make matters worse, Carol even blamed Sophia for her botched hair dye, claiming somehow that Sophia was trying to make a joke out of her. So already, Carol sounds like a gem.

Sophia went on to say she saved up to go on a two-week vacation with her husband. As soon as Carol found out, she asked to come along. When she was told no, Carol “threw a fit.” Umm…yikes!

Things went along like that for a while. “She called, texted, sent people to talk to me into letting her come, even threatened to call the police and make some complaint up to get us to stay if she [couldn’t] come,” Sophia wrote.

This is the first in a long line of red flags for me. The total disregard for Sophia’s feelings is concerning and her boundaries are already being crossed left and right. The extremes that Carol is willing to go to (calling the cops?!) are disconcerting at the least.

It was also obvious from the beginning that the husband wanted his mother to come along. He began to demand that his mother come, eventually giving Sophia an ultimatum. Which is the start of his many manipulations.

He stated that he wouldn’t go on the trip unless his mother could come too. When Sophia “called his bluff,” he relented and said that he would drop it. However, his only “responsibility” for the trip was to book the flight. And, that he did.

Sophia and her husband make it to the airport to begin their journey. However, Sophia noted that her husband was acting weird. She said it seemed like he was “looking for someone” at the airport.

Her concerns are verified when she finds Carol ready to go on vacation with them, complete with luggage and a ticket to board the airplane. The ticket was, of course, booked by the husband.

Sophia turns on her heels and walks out of the airport, but her husband is right behind her, yelling at her to come back and telling her that she is overreacting. He also tries to play it off like his mom was “already there” so she should just go with it and not ruin the trip.

Even after Sophia goes home, her husband continues to “berate” her and tells her that she’s being “too hard” on his mom. He even called Sophia’s family to tell them she’s “ruined” the trip. Even her family tells her that she should have “sucked it up” and tried to enjoy the vacation.

What’s Next For This Couple?

There are likely several moments in which Sophia could reflect to find out where and when things started going wrong in the relationship. But she definitely did the right thing in refusing to just “go along” with the situation at the airport.

The manipulation and gaslighting that is happening here is frightening, and it’s likely been going on for a while. This may just be the latest circumstance. Luckily Sophia stood up for herself and refused to go on a vacation where she likely would be outvoted and ignored for most of the trip.

Many of the commenters had similar advice for Sophia. Divorce. The top comment stated, “I don’t wanna call the divorce card but … divorce. You told your boundaries, you said no. She crossed it. Your husband told you he would tell her no, he lied. He tried to pin you in a corner by not saying anything and bringing her anyways and got upset [when] you refused to be a part of his little trap?? And then to berate you?? He’s not a good man. He needs to go.”

This sentiment is echoed again and again and for good reason. Secure relationships are where both people feel heard and connected. They should be honest with one another and should feel comfortable expressing their feelings.

Most, if not all of these important issues seem to be missing from this relationship. Oh, they also shouldn’t spend the other person’s money without their consent. All of these things are true for any relationship.

If you are constantly trying to be heard, attempting to pacify the other person, or if you are afraid that your partner is lying and gaslighting you, then it may be time to cut ties. After all, there are other “travel partners” that may be better suited for you. We hope Sophia finds a new one (minus the overbearing mother-in-law), soon.