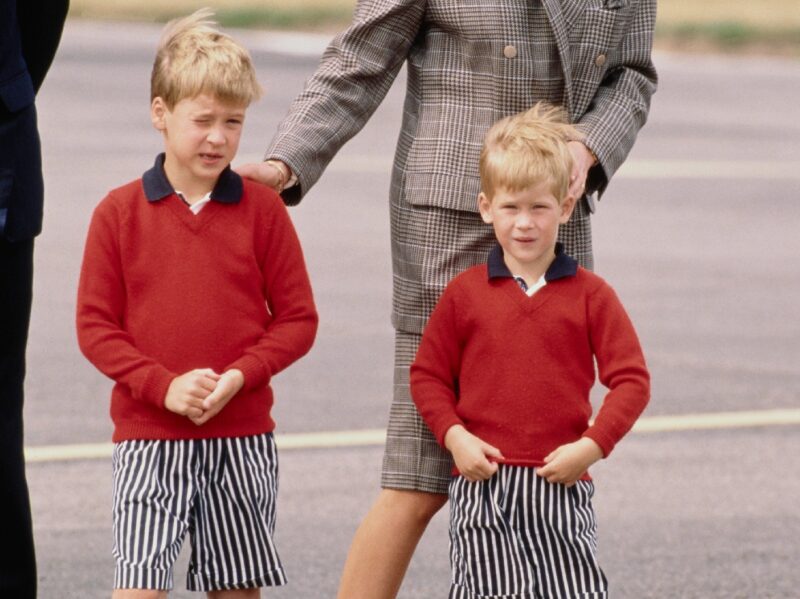 The royal brothers’ rivalry has been a well-known fact among royal insiders.

Prince William and Prince Harry are famously not getting along these days, but a new video shows that there’s always been a bit of sibling rivalry going on between the pair.

A fan account for the royal siblings recently posted a video from years ago, when Harry was still a baby. In the clip, Prince Charles juggles an infant Harry while William stands in front of them, pulling on his brother’s leg.

Charles then lifts Harry over William’s head and sets him on his shoulders, at the direction of a photographer who is off-camera. Harry takes the opportunity to yank on William’s hair. Charles pries his fingers off William’s hair, but the now-Duke of Cambridge shows off his more dramatic side, falling to the ground theatrically and repeating, “Ow, Harry!”

“And that’s how William lost his hair,” one person joked in the comments section of the video. “Archie looks just like his daddy,” another fan wrote. While many loved the sweet video, others voiced criticisms of all three men.

“When life was so sweet until Harry betrayed his entire family,” someone commented. Someone else pointed the finger at the older prince, writing, “Hope William sees this. [Reach] out to Harry.”

The harshest criticisms were against Prince Charles. “[He] Doesn’t know what to do with the kids! Good grief!” one person wrote, referring to the prince’s obvious discomfort at trying to handle a baby and a toddler at the same time.

“Clearly Charles is not at ease with babies and kids…” another commented. One fan attempted to unite the William fans and the Harry supporters, writing, “Everyone here is like ‘Harry betrayed Will’ or ‘Will betrayed Harry’ but let’s not forget who the real villain is: the man who looks so unnatural holding the baby.”

The royal brothers’ rivalry has been a well-known fact among royal insiders. William and Harry frequently butted heads over royal responsibilities, charity patronages, and partying exploits that later ended up on the front pages.

Their latest spat over Harry’s exit from the royal family, along with Meghan Markle and their two children, Archie and Lilibet, seems to be the most serious one yet. Tensions reportedly started running high when William expressed doubts about Harry’s relationship with Meghan, and as things got more intense with the British press in the run-up to the wedding, relations between the brothers broke down.

While the brothers might not be as close as they once were, this unearthed video clip shows that William and Harry have always been ready and willing to fight with one another—just like any other pair of brothers.