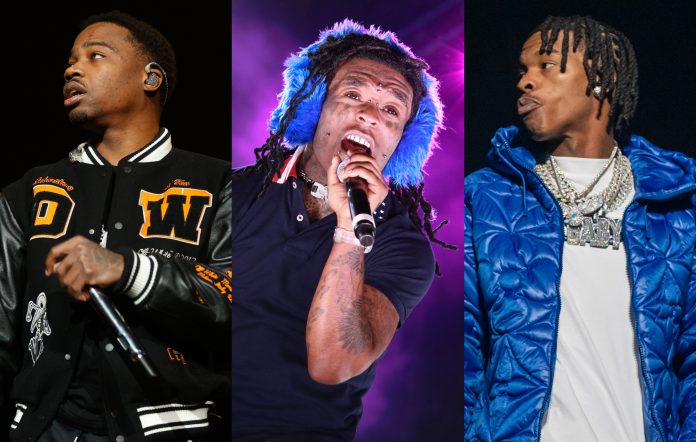 Though he’s no stranger to the Grammy Awards, with one win and six more nominations under his belt, Roddy Ricch has declared he’s not so keen on who the Recording Academy have snubbed for nominations in recent years.

In particular, Ricch shouted out Lil Uzi Vert and Lil Baby – the former of whom he’s yet to link up with, but the latter he featured on the track ‘Moved To Miami’ – and said he was annoyed when they weren’t nominated for Grammys of their own.

“I feel like the n****s now that’s doing shit, like, no disrespect, but we really breaking barriers. We reachin’ different [heights]…”

Take a look at the interview clip below:

Though Ricch didn’t it make it explicitly clear which awards he thinks Uzi and Lil Baby were snubbed for, it’s likely he was making reference to the Best Rap Album category at last year’s Grammys. Both artists released albums in 2020, with Lil Baby’s ‘My Turn’ landing in February, and Uzi’s ‘Eternal Atake’ in March.

At this year’s Grammys, Ricch was nominated twice for Best Rap Song and Best Melodic Rap Performance, with both ‘The Box’ and ‘Rockstar’ (his team-up with DaBaby) earning nods. The former track was also nominated for Song Of The Year, and the latter for Record Of The Year.

iann dior on Lil Baby, Kanye West and the first time he got played on the radio | Firsts

The rapper dropped his second album, ‘Live Life Fast’, earlier this month on Atlantic. In a four-star review, NME said the album “finds Roddy Ricch on a creative upswing”, noting that “his unprecedented composure in the face of gargantuan success is impressive”.