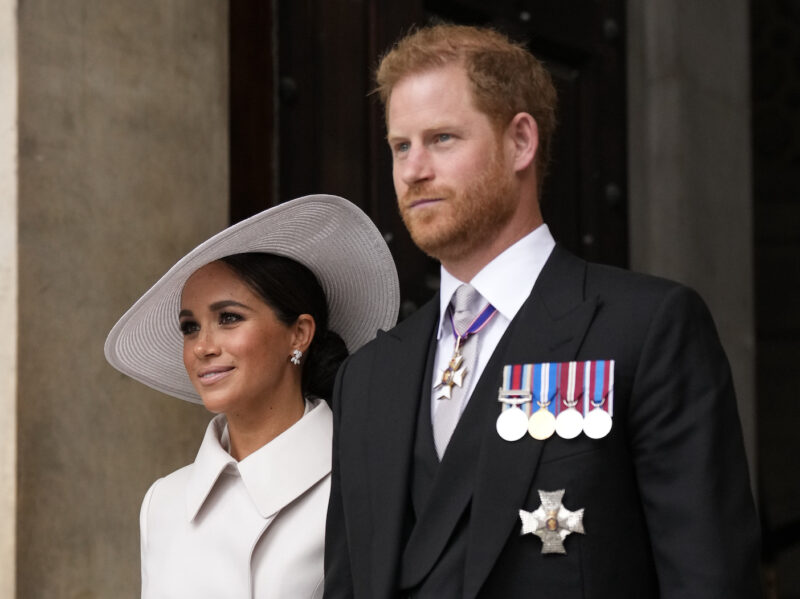 Rumor has it that the Sussex bank account isn’t looking good.

Is Meghan Markle and Prince Harry‘s latest venture actually just a shameless cash-grab? One tabloid claims the couple is desperate for money. Here’s the latest gossip about the Duke and Duchess of Sussex.

This week’s edition of the National Enquirer reports Prince Harry and Meghan Markle are ready to “sell out” to keep their deal with Netflix. Recent reports reveal that the couple is planning to let cameras into their home to film a personal docuseries about their lives. “They thought they had it made when they signed with Netflix two years ago, but they’ve produced nothing and now the pressure’s on,” an insider spills. “They can call the TV show a docuseries but they’re shamelessly turning themselves into tacky Kardashian spinoffs!”

Sources explain that the couple is floundering after failing to produce any content for Netflix or Spotify. And now that Harry’s memoir has been delayed, the duke and duchess are said to be struggling to make ends meet. “The bottom line is Meghan and Harry aren’t cashing in like they thought they would—not even close,” the tipster charges. “[The Sussexes] have no qualms about exploiting their titles and trashing the royal family. When they’re desperate, who knows what they’ll say or do next?”

This report is absolutely riddled with the author’s glaring bias against Prince Harry and Meghan Markle. First of all, it’s true that Page Six broke the news that Harry and Markle would be filming an “at-home” docuseries about their lives. But that is the only information we have. We have no idea what the show will be covering or when it will air. But knowing the Sussexes, we have a hard time believing it will strike a similar tone to Keeping Up with the Kardashians.

Truthfully, we have no idea what motivated the pair to take this direction. But our best guess is that it wasn’t desperation like the magazine claims. The Sussexes are believed to have their other documentary series, Heart of Invictus, locked and loaded. Furthermore, all signs point to Markle having her first podcast episodes on the way. As for Harry’s memoir, no one knows why his publishers pulled its release date. But, delayed or not, we still have every reason to believe it’s coming. So, now that things are ramping up for the Sussexes, we just aren’t buying this story about them being desperate for cash.

The Magazine On Harry And Meghan

Of course, we struggled to believe just about anything the National Enquirer writes about Harry and Markle. A couple of months ago, the outlet reported Markle had Harry “under her thumb.” Then the magazine claimed Harry was blackmailing Queen Elizabeth in order to get royal protection. And more recently, the publication alleged Markle was living her “worst nightmare” after some career setbacks. Obviously, the Enquirer can’t be trusted to provide an unbiased outlook on the Duke and Duchess of Sussex.