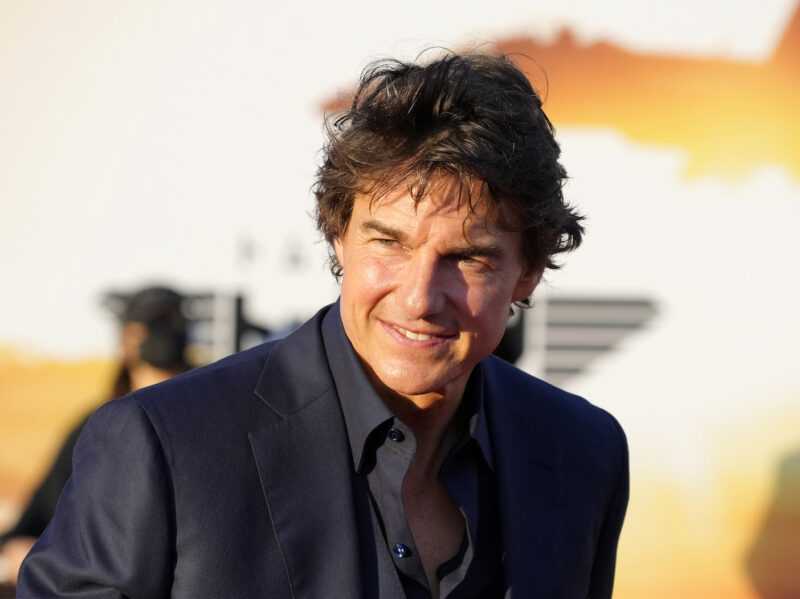 Is Tom Cruise running back to an old flame? One tabloid claims the Top Gun: Maverick star was rejected by a major actress, leading him to swallow his pride and run back to his ex. Let’s take a closer look at the shocking rumor.

This week, the National Enquirer reports Tom Cruise’s love life has hit an unlucky streak, and his friends are apparently urging him to give his romance with Hayley Atwell another chance. Cruise and Atwell initially hit it off on the set of Mission: Impossible — Dead Reckoning Part One, immediately sparking dating rumors. But the co-stars’ alleged romance was said to have fizzled out. “They didn’t break up over anything,” an insider confides. “She just wasn’t ready for anything serious back then, and he respected her wishes.”

But sources say Cruise then set his sights on a new woman: Lady Gaga. Cruise met Gaga when she recorded the theme for Top Gun: Maverick, and, according to the article, the actor was smitten. But sources say Gaga rejected Cruise, leaving him in the dust. And now, Cruise’s inner circle is apparently pushing him to give things with Atwell another chance. “Tom’s definitely in the market for a new girlfriend, and he’s discreetly put the word out for folks to set him up if someone ultra-special comes along,” the tipster spills. “But everyone’s keeping their fingers and toes crossed that he and Hayley can give it another go.”

After looking into the tabloid’s claims, all we could find were holes. First of all, Tom Cruise and Hayley Atwell never confirmed their relationship. While they were spending quite a bit of time together there for a moment, nothing about their public interactions definitively spelled romance. We were never able to completely rule out the possibility that they were just friends.

As for the Lady Gaga part of the story, we can’t help but find it a bit funny. Cruise certainly did gush about Gaga, and the musician even posted a photo of her and Cruise kissing each other’s cheeks. From what we can tell, Cruise is now a major Gaga fan. But we have absolutely no reason to believe he ever pursued her romantically.

But here’s the twist in this story: After months of radio silence on her rumored romance with Tom Cruise, Hayley Atwell sparked speculation once again by showing up to the Top Gun: Maverick premiere. It baffles us why the tabloid didn’t bother mentioning this part since it certainly serves to make its story more convincing. But that just goes to show that the outlet didn’t do its research.

So, are Cruise and Atwell dating? We genuinely don’t know. Cruise has kept the details of his love life close to the cuff since divorcing Katie Holmes in 2012. And for that reason, we’re highly skeptical of any outlet claiming to know anything about the actor’s love life.

And, of course, the National Enquirer‘s past reporting on Tom Cruise certainly doesn’t help its cause. Last year, the outlet published a bizarre report claiming Cruise was desperate to recover top-secret “Scientology communications” after his car was stolen. Then the magazine claimed Cruise was stress eating after Hayley Atwell dumped him. And the publication also claimed in a totally separate report that Lady Gaga rejected Cruise. Obviously, the Enquirer is the last place we’d go for genuine updates on the actor.