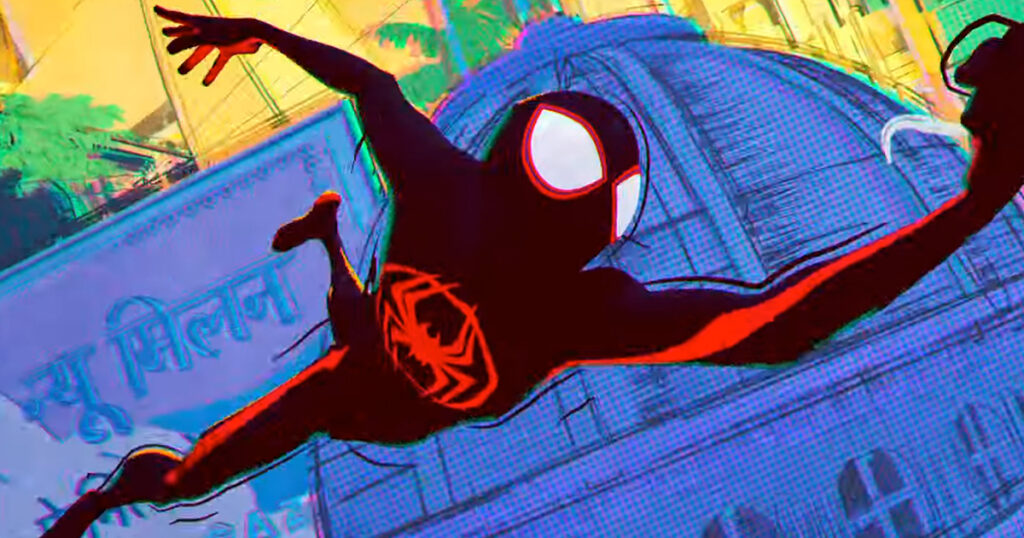 Spider-Man: Across the Spider-Verse footage swings into CinemaCon 2022

Spider-Man: Across the Spider-Verse (Part 1) doesn’t swing into cinemas until next year, but that didn’t stop Sony from showing 15 minutes of footage at CinemaCon 2022. And make sure to scratch that “Part 1” when talking about this movie from now on, as Part 2 is officially called Spider-Man: Beyond the Spider-Verse. So there!

Sony brought Phil Lord and Chris Miller to the presentation, who said the highly-anticipated animated sequel boasts the largest crew ever assembled for an animated film. While Spider-Man: Into the Spider-Verse took place in one universe, the sequel takes place in six!

In the footage shown at the annual event, Spider-Gwen has a troubled relationship with her dad, who’s obsessed with catching the mysterious female spider-person in his city. He has no idea it’s his daughter beneath the mask. The footage then cuts to a Sepia-toned Vulture robbing a bank and taking hostages. Now, when we say The Vulture we mean yes, Adrian Toomes, but also a real Vulture as that’s what this version of the character is – an actual Vulture. Gwen swings in to fight him and notices that he’s speaking Italian. When Vulture gets the upper hand, Spider-Man 2099 (Miguel O’Hara) enters the fray. As they do battle, he explains to Gwen that what she and Miles did in the last film left a hole in the Multiverse. Villains are now making their way into different dimensions. The Spider-Men are doing the same. They all work together. Miguel calls for backup, and Spider-Woman (Jessica Drew) swings in. She’s PREGNANT! Holy Spider-Balls! Are we getting Gerald Drew in this movie?

The action is incredible, even if it’s a rough cut. Team Spider all fight together in a way that calls back to Spider-Man: No Way Home. It’s a diverse team of heroes, to be sure. The footage ends with Spider-Gwen taking off her mask, revealing herself to her father, who has her cornered. He thinks she killed Peter Parker, but instead of letting her go, he tries to arrest her. Miguel and Jessica intervene, and the dimension-hopping begins anew!

The footage then cuts to Miles Morales as Spider-Man. He’s in trouble at school, and his parents meet with his guidance counselor. He’s in trouble for missing classes while fighting crime. His counselor thinks he’s ditching out. Miles wants to attend Columbia University, but his grades aren’t up to snuff. He then bails on the meeting because his Spidey-Sense starts to tingle.

Can I have this movie now, please? I need it! Inject it into my veins, Sony!

What do you think about the footage from Sony’s CinemaCon presentation? Are you freaking out like I am? Gerry Drew, people! Let’s go! If his dad isn’t in the movie, we riot!