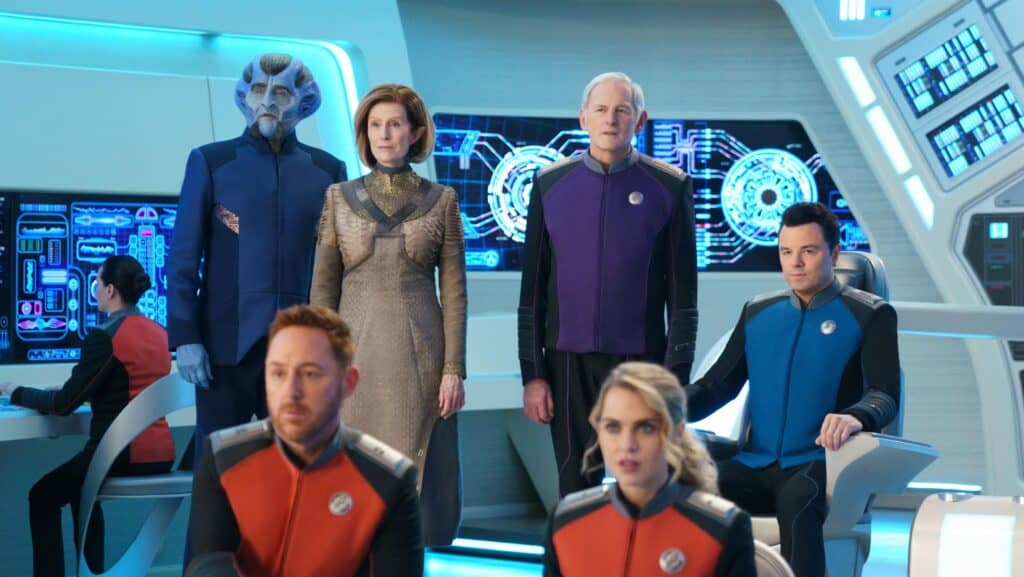 Plot: Set 400 years in the future, The Orville: New Horizons finds the crew of the USS Orville continuing their mission of exploration, as they navigate both the mysteries of the universe and the complexities of their own interpersonal relationships.

Review: When The Orville premiered on FOX back in 2017, Seth MacFarlane’s homage to Star Trek felt like a live-action Family Guy set in outer space. With some raunchy humor mixed in with science fiction tropes, most critics were unkind to the series. Season two improved the concept considerably as MacFarlane and his team of writers pulled away from the off-color jokes and focused on continuing with a narrative aimed at telling engaging stories about morals and tolerance through the lens of alien exploration. Now, after a switch to Hulu and three years off the air, The Orville is back with a bigger budget, better special effects, and an even more dramatic approach to storytelling. This season, subtitled New Horizons, is still the same series you know but made better in every way. The Orville has come into its own and Seth MacFarlane’s vision is finally becoming clear.

When season 2 concluded, The Orville shook things up with an alternate timeline, a foray into a future where the crew had turned into rebels fighting the evil Kaylon, and a cliffhanger ending that didn’t indicate where things would go next. At the start of this season, within minutes we are thrown into an action-heavy sequence showing the final battle with the Kaylon before being thrust into the present day. With the ship being retrofit for active duty, the crew is struggling to deal with robot Isaac who has returned to duty thanks to Captain Mercer (MacFarlane). Most of the crew resent Isaac, especially new addition Ensign Charlie Burke (Anne Winters) who lost her best friend in the battle. When a slur is graffitied on a wall, Isaac takes a drastic action that has ramifications for the entire ship. This is a heavy episode that deals with death, grief, PTSD, and more. None of these seem like fodder for a Seth MacFarlane show, but that is just part of what makes The Orville very different this season.

The workplace antics that defined this series in prior seasons are still there but the focus is a little different. At least in the premiere episode, Captain Mercer and his first mate, Kelly Grayson (Adrianne Palicki), take a back seat with the focus mostly on Isaac, Burke, and Doctor Finn (Penny Johnson Jerald). Jerald is an incredible veteran actress who has consistently lent The Orville some of the best acting of the ensemble, but how she deals with Isaac and her family’s relationship with him leading to this episode is powerful stuff. There are also solid sequences involving John LaMarr (J Lee) as well as Gordon Malloy (Scott Grimes), both of whom were relied on for their comedy stylings and now have balanced a sense of humor with some well-placed gravitas.

This season of The Orville also benefits from some added polish in the special effects department. The design of Isaac as well as the exterior space sequences are all significantly better than the first two seasons of the show, including the make-up work on the alien crew aboard the ship. As well-executed as the FX were in the first two seasons, they did have an air of mediocrity due to network constraints. Hulu certainly ponied up a lot of money to allow The Orville to hold its own opposite Paramount+ and their various Trek series. Aboard the ship, the visual style of this series still looks very similar to The Next Generation era of Star Trek, but it no longer feels quite as staged. From the stirring musical score to the scene transitions, The Orville: New Horizons is far more polished than we have seen in the past. This could be due to multiple years to get the visuals just right, but I hope this is more indicative of what this series will look like moving forward on its new streaming home.

This season is several episodes shorter than prior runs, but each episode runs a full hour or longer without commercials. The switch to streaming has also afforded the show a few more uses of profanity, but it is used sparingly and only when appropriate for the moment. The creative team is also scaled down a bit with only two directors helming this season: Seth MacFarlane himself and veteran director John Cassar. With MacFarlane taking on more of the primary duties as writer this season, The Orville: New Horizons looks and feels more like a consistent vision of what this story should be. It also opens with a memorial to the late Norm MacDonald who passed away after completing all of his voice work as Lt. Yaphit. Hearing the legendary comedian one last time is bittersweet but also a wonderful way to pay tribute to his career. If you were underwhelmed by the first season of The Orville and didn’t give the second a chance, now is a great time to jump back in. The Orville: New Horizons is an excellent tribute to Seth MacFarlane’s love of Star Trek but begins to distinguish itself as its own series and story that does not need to rely on shocking humor to get your attention. This series is still funny and offers a different glimpse of the future than Gene Roddenberry gave us while also propelling the potential for this tale in a new direction. The Orville: New Horizons marks a reset for the inconsistent first two seasons of this show and deserves to be on your watchlist more than ever.

The Orville: New Horizons is now streaming on Hulu with new episodes premiering every Thursday. 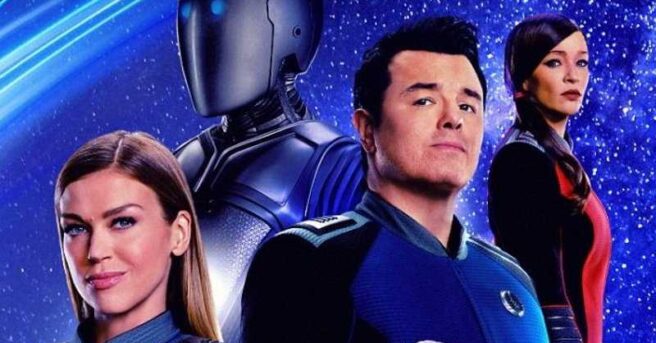