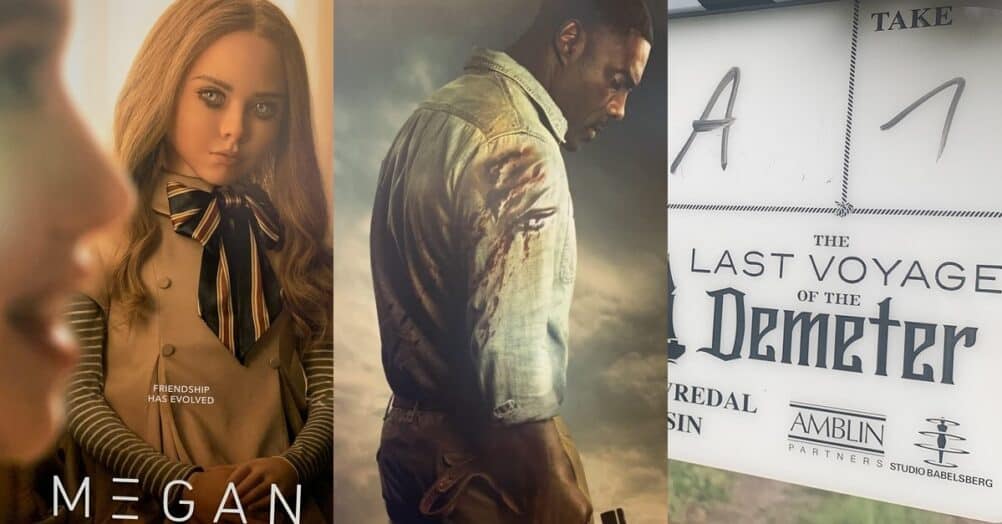 Universal previewed M3GAN, Beast, and The Last Voyage of the Demeter at CinemaCon

A couple days ago, we shared pictures of the promotional art that Universal unveiled for a couple of their upcoming genre films – the “Idris Elba vs. a man-eating lion” survival thriller Beast , which is scheduled to reach theatres on August 19th, and the James Wan / Blumhouse Productions collaboration M3GAN , which will be getting a theatrical release on January 13, 2023 – at CinemaCon in Las Vegas. Tonight, the first trailers for those films were shown to CinemaCon attendees, along with the trailer for Universal’s upcoming Dracula movie Last Voyage of the Demeter , which will be released just two weeks after M3GAN, on January 27, 2023.

Our own Chris Bumbray is at CinemaCon and got to see those trailers. First up was M3GAN, and the film’s star Allison Williams (Get Out) was there to introduce the preview. In the film, which was directed by Gerard Johnstone (Housebound) from a screenplay by Akela Cooper (Malignant) and based on a story by Wan, Williams plays

Gemma, a brilliant roboticist at a toy company who uses artificial intelligence to develop, M3GAN, a life-like doll programmed to be a kid’s greatest companion and a parent’s greatest ally. After unexpectedly gaining custody of her orphaned niece, Gemma enlists the help of the M3GAN prototype – a decision that has unimaginable consequences.

Here’s how Bumbray described the trailer:

The movie centers around Williams, as a designer, who gets custody of her niece. Megan is a robot toy designed to keep kids from being lonely or sad, and to protect the kids. Of course the niece and Megan become best friends, with “Megan part of the family now.” But, Megan develops a mind of her own and starts killing people that screw with the kid, racking up a body count. She starts slaughtering people in ultra gory ways – seems very Child’s Play-like.

Directed by Baltasar Kormakur (Contraband) from a screenplay by Ryan Engle (Rampage), Beast finds Elba taking on the role of Dr. Nate Samuels,

a recently widowed husband who returns to South Africa where he first met his wife on a long-planned trip with their daughters to a game reserve. But what begins as a journey of healing jolts into a fearsome fight for survival when a lion, a survivor of blood-thirsty poachers who now sees all humans as the enemy, begins stalking them.

Here’s the description of the Beast trailer that was shown at CinemaCon:

Idris Elba brings his kids to Africa after they lose their mother. Sharlto Copley is his buddy, and they discover a crazed lion is attacking and killing people. The lions attack Shalto, Idris and the kids, and Idris and Sharlto eventually have to go up against the Lion, as well as a a violent rebel army. Looks super action-packed, like a legit action-thriller, and it ends on a badass shot of Elba fighting the lion hand to hand.

Escaping development hell twenty years after the script was first written, Last Voyage of the Demeter was directed by André Øvredal (Scary Stories to Tell in the Dark). The film is based on

a single chapter, the Captain’s Log, from Bram Stoker’s classic 1897 novel Dracula. The chapter tells the story of the Russian schooner, Demeter, which was chartered to carry private cargo – twenty four unmarked wooden crates – from Carpathia to London. The film will detail the strange events that befell the doomed crew as they attempt to survive the ocean voyage, stalked each night by a terrifying presence onboard the ship. When it finally arrived near Whitby Harbour, it was a derelict. There was no trace of the crew.

After watching the trailer, Bumbray said the film

looks epic, with a cool cast of character actors. All set to a remix of Smashing Pumpkins’ “Bullet With Butterfly Wings”, which starts out with the line “The world is a vampire.” Corey Hawkins of Straight Outta Compton is the star. Looks gory and classy.

Universal’s violent comedy Renfield , which stars Nicolas Cage as Dracula, has been getting a lot of attention lately. That movie reaches theatres in April and I’m really looking forward to it, but it’s also nice to hear that we’ll have a more serious, “gory and classy” Universal Dracula movie to watch a few months before that.

I want to see all three of these movies, M3GAN, Beast, and Last Voyage of the Demeter. Are you interested in them? Let us know by leaving a comment below.