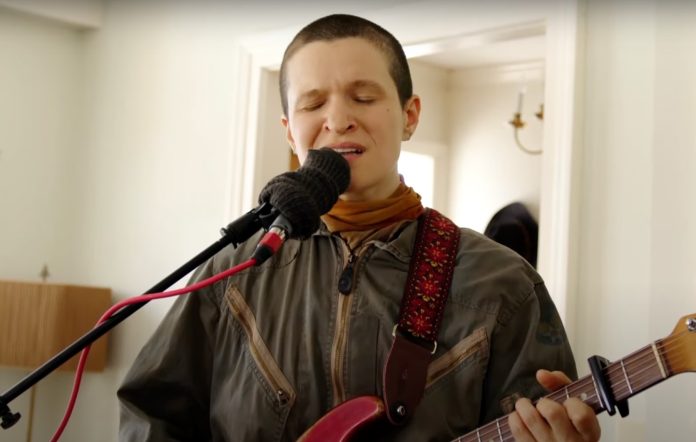 Big Thief took to The Late Late Show With James Corden to perform ‘Certainty’ last night – check it out below.

‘Certainty’ is taken from Big Thief’s fifth album ‘Dragon New Warm Mountain I Believe In You’, which was released in February.

The performance on Corden rounds off a hat trick of late night American talk show appearances, with the band using the same living room practice space to air  ‘Spud Infinity’ on The Tonight Show Starring Jimmy Fallon and ‘Simulation Swarm‘ on The Late Show With Stephen Colbert.

Big Thief are currently touring North America ahead of a string of UK and European festivals, including Glastonbury, Primavera Sound, Best Kept Secret and Tempelhof Sounds. You can find the band’s full live schedule here.

In a video message to fans though, frontwoman Adrianne Lenker has asked fans to stop talking through their support acts’ sets.

“It’s really come forward in the last few days that: when music is happening in a room, there’s a performer on stage playing and doing their craft, when you enter into that space, try to be mindful of what’s happening and pay attention and don’t talk,” she said.

Hello. We are now contributing 1% of our gross touring income to @earthpercentorg, including income from last year’s US tour. We are grateful to be part of this group which will grant $ to organizations fighting the climate emergency in the most impactful ways. pic.twitter.com/ebiAHNmMa3

Big Thief have also pledged to contribute one per cent of their touring income to tackling the climate crisis, partnering with Brian Eno‘s EarthPercent organisation.

“The hope is that something like this could spread to our peers, especially those making money and maybe even become a standard for artists and those around the music industry (labels, DSPs, publishers, managers, booking agents, etc).”

Big Thief were the first band to perform on The Late Late Show after host James Corden announced he would be leaving next year.

“When I started this journey, it was always going to be just that. It was going to be a journey—an adventure,” he said. “I never saw it as my final destination, you know? And I never want this show to overstay its welcome in any way. I always want to love making it. And I really think in a year from now that will be a good time to move on and see what else might be out there.”