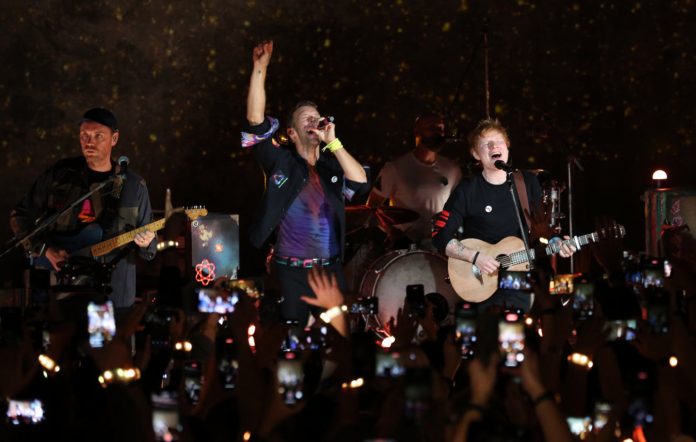 The one-off gig saw the band celebrate the release of their upcoming album, ‘Music Of The Spheres’, which is due to arrive on Friday (October 15).

During their set, Chris Martin and co. brought out Ed Sheeran, who joined the band for a rendition of the band’s 2005 song ‘Fix You’, taken from their third studio album, ‘XY’.

Coldplay returned the favour by accompanying Sheeran as he played ‘Shape Of You’ and his latest single, ‘Shivers’. You can see footage and photos from the performance below.

Coldplay were also joined on the night by Fleur East. You can see the setlist from the night below:

Later this week, Coldplay will be taking part in a two-day immersive event in London, dubbed ‘The Atmospheres’.

The event, which will take place at the weekend (October 15-16) and comes in association with Amazon Music, will also be taking place in New York, Tokyo and Berlin.

The band will also be hosting a week-long music residency on The Late Late Show with James Corden .

The residency will begin a few days after the release of the band’s ninth studio album ‘Music Of The Spheres’, which is set to arrive on October 15, and follows a similar week-long stint on the show from Lorde in August.

Meanwhile, Ed Sheeran has revealed that he and Elton John are set to collaborate on a new Christmas single this year.

In an interview with Dutch radio station NPO Radio 2 , Sheeran revealed that John reached out to him for the collaboration last year after he discovered that his own Christmas song ‘Step Into Christmas’ had hit the UK Top 10 for the first time ever.