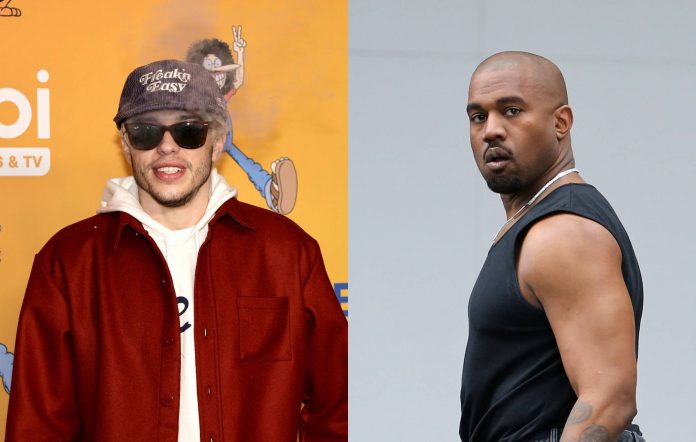 Pete Davidson has joked about Kanye West pulling a ‘Mrs. Doubtfire’ – watch footage from his Netflix Is A Joke Festival set below.

Davidson appeared at the festival last Friday (April 29) to premiere his new show, Pete Davidson And Best Friends, which was filmed for release on Netflix later in the year. To a sold-out crowd at Los Angeles’ Fonda Theatre, he opened the set by poking fun at the claims that West tried to spread rumours about Davidson – who is currently dating West’s ex-wife, Kim Kardashian – having AIDS.

“I had an AIDS scare this year,” he said before telling the audience that he got himself tested for the condition since West is a “genius”. He assured fans that he does not have AIDS – he just looks like he does before calling the quip “so ‘90s.” Watch footage below:

Elsewhere in the set, Davidson asked “does anyone else secretly Kanye pulls a Mrs Doubtfire?” referencing Robin Williams’ 1993 film where the actor disguises himself as a Scottish housekeeper to see his children during a bitter divorce. “I come home one day and they’re like ‘this is the new housekeeper’. He’s like “what’s up fam?’”

Davidson also spoke about his friend Jack Harlow appearing on Kanye West’s ‘DONDA‘. “People ask does that bother me? No. He’s a rapper, that’s his field. That’s what they do” explained Davidson. “That doesn’t hurt my feelings. It would hurt my feelings if I saw (comedian) Bill Burr at Sunday Service.”

It comes after repeated attacks from Kanye West. Earlier this year his video for ‘Eazy’ saw the rapper kidnap and kill a claymated version of Davidson. The track also features the line “God saved me from that crash / Just so I can beat Pete Davidson’s ass.”

Though he initially kept quiet on the matter, Davidson responded to West’s attacks a few days after the second ‘Eazy’ video landed, writing to the rapper in a text: “I’ve decided I’m not gonna let you treat us like this anymore and I’m done being quiet.”

At the end of Davidson’s sets at Netflix Is A Joke: The Festival, Machine Gun Kelly – a close friend, former housemate and longtime collaborator of the comedian – came onstage to perform a surprise three-song set. The pair duetted on the ‘Mainsteam Sellout’ cut ‘Ay!’, while MGK performed ‘Candy’ and ‘Make Up Sex’ by himself.