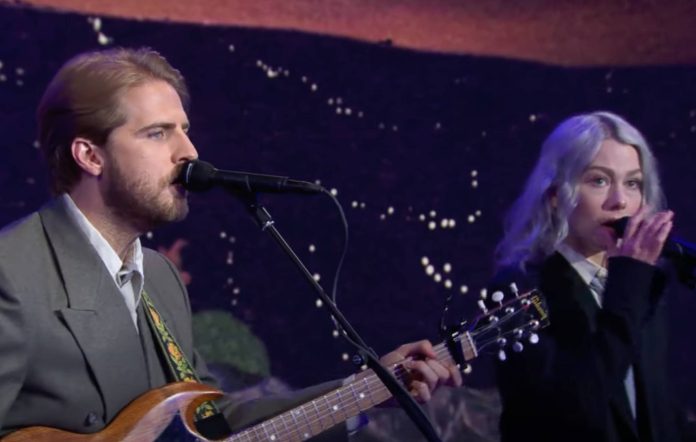 Phoebe Bridgers has performed on CBS with singer-songwriter Christian Lee Huston – check out the moment below.

The pair, who have collaborated together frequently in the past, appeared on CBS This Morning: Saturday earlier today (June 18). They performed two of Hutson’s originals together, ‘Rubberneckers’ and ‘Lose This Number’.

Check out the performance here:

Meanwhile, Lucy Dacus was revealed as the surprise guest during Bridgers‘ show in Queens, New York earlier this week (June 16).

Bridgers previously teased “a very special surprise guest” on the show’s promotional poster, but no other details were provided at the time. Tonight, after opening act MUNA had played, Dacus was revealed as the surprise act, filling the slot before Bridgers’ set.

Dacus performed a short set, including ‘Night Shift’, ‘Hot Heavy’ and ‘Going Going Gone’, during which she was joined by MUNA, Bridgers and Bridgers’ dog Maxine. She also returned during Bridgers’ performance of ‘I Know The End’, lending her screams to the song’s climactic ending.

The show was part of Bridgers’ ‘Reunion Tour’, which has seen the artist play 24 shows around North America since early May.

Prior to her Queens show, Bridgers’ stopped by The Tonight Show Starring Jimmy Fallon to perform ‘Sidelines’ with her band. The song features on the soundtrack for Conversations With Friends , the TV adaptation of Sally Rooney’s novel of the same name. She recently shared a music video for the song using footage from her current tour.