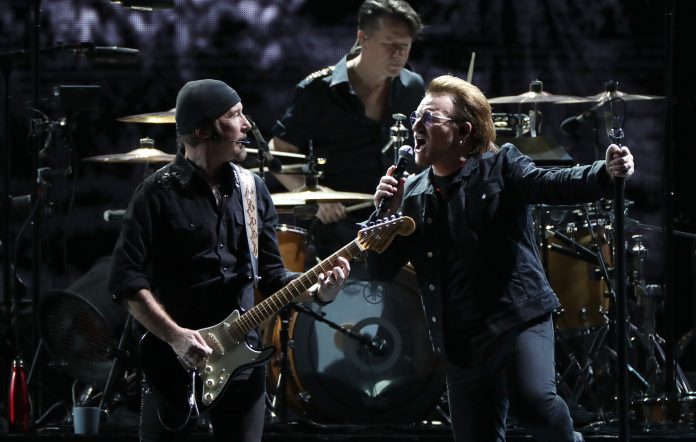 U2’s Bono and The Edge held a surprise acoustic concert in a bomb shelter in Kyiv earlier today (May 8), at the invitation of Ukrainian president Volodymyr Zelenskyy.

The duo delivered a set featuring some of their biggest hits as they showed their support for the country, which has been fending off an invasion by Russia since February 24.

Bono and The Edge performed in one of Kyiv’s subway stations that have been repurposed as a bomb shelter since the invasion began. According to the Irish Times , the musicians started the set with ‘Sunday Bloody Sunday’ as the sound of air-raid sirens went off in the distance.

Elsewhere in the setlist were ‘With Or Without You’, ‘Desire’ and ‘Angel Of Harlem’. Before the latter, Bono told the crowd that there was “nowhere in the whole world that we would rather be in today than in the great city of Kyiv”.

The pair also covered Ben E. King’s ‘Stand By Me’, bringing up a Ukrainian soldier on stage to help them sing it, and changing the “me” in the lyrics to “Ukraine”. Musicians who have had to join the military in recent months also joined the band on stage throughout the set, including Antytila’s Taras Topolya, according to Rolling Stone .

During the performance, Bono also addressed the war that is ongoing in Ukraine and has taken the lives of 3,280 Ukrainian civilians as of Friday (May 6), according to the OHCHR. “The people in Ukraine are not just fighting for your own freedom, you are fighting for all of us who love freedom,” he said. “We pray that you will enjoy some of that peace soon.”

After the surprise concert, the singer and the guitarist posted a tweet on U2’s Twitter page, explaining: “President @ZelenskyyUa invited us to perform in Kyiv as a show of solidarity with the Ukrainian people and so that’s what we’ve come to do.”

President @ZelenskyyUa invited us to perform in Kyiv as a show of solidarity with the Ukrainian people and so that’s what we’ve come to do. — Bono and The Edge #StandWithUkraine

The performance follows U2 taking part in the ‘Stand Up For Ukraine’ campaign last month, alongside the likes of Bruce Springsteen, Elton John and more. “The brave people of Ukraine are fighting for their freedom – and for ours – in the face of unspeakable violence and an unjust invasion,” the band wrote in a statement to accompany their performance of their 2000 song ‘Walk On’.

“More than four million people, mostly women and children, have had to flee for their lives – a population nearly the size of Ireland.”

Meanwhile, last month a Norwegian DJ bought a number of billboards on the road to Coachella to raise awareness and funds for the Ukraine relief effort. The posters, which read “Drop beats not bombs” on blue and yellow to represent the Ukrainian flag, were put up by Matoma in collaboration with the Music Saves UA charity.

You can donate here to the Red Cross to help those affected by the conflict, or via a number of other ways through Choose Love.